Karl Grose, one of the founding fathers of CalNet, is retiring.

The oldest of six kids, Karl came to UC Berkeley from smoggy Southern California to pursue a graduate degree in Organic Chemistry. He got a job in 1980 as an analytical chemist in the UC Berkeley Nutritional Sciences department with Prof. Leonard Bjeldanes, and as the department began to computerize (in the late 1980s with Commodore PET 8032s for admin staff), he started providing IT support. Karl was the only person in the department who had any idea how to program a Commodore, since he had one at home. His role expanded into supporting the department’s first networks, setting up the first printers, etc. Then in the mid-1990s, he applied for an internship with the Workstation Support Services (WSS) division of IST and thus began a lifetime of building technology at UC Berkeley. 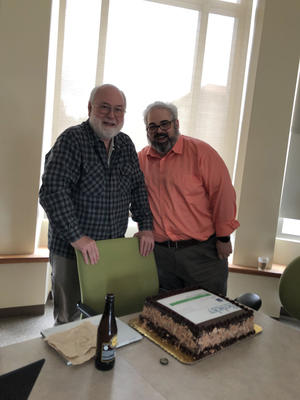 In WSS, Karl was on the team that put together the famous Connecting at Berkeley (C@B) CD-ROM, which instructed users on how to connect to the Internet back in the days of dial-up. LDAP (Lightweight Directory Access Protocol) was a hot topic in the '90s, and Karl joined a project in IST to use an LDAP service as a campus directory. The LDAP Project designed the first component in the CalNet software stack and eventually changed its name to the CalNet Project.

One of the original, and somewhat revolutionary, features of CalNet was using LDAP together with MIT Kerberos servers (which is a safe way to store passphrases). Karl and the CalNet team decided to integrate the two to manage directory data and identity accounts here at Cal. The group created the basic rules around ID and passphrase conventions as well as the name CalNet ID (a portmanteau combining “Cal” and “NetID”). Further integration included a custom-built webauth application developed by colleague Mike Friedman, which was later replaced by CAS (Central Authentication Service. CAS allows users to enter their username and passphrase once and login to multiple systems. We still use CAS and CalNet’s many requests for bug fixes, upgrades, and features that have, over time, shaped the development of the CAS open source project itself.

Karl enjoyed working on a team that designed everything from the ground up. It was quite a feat to get campus system administrators and stakeholders on board, but the team had a well-thought-out plan and was able to convince everyone of the value of the project. Early CalNet was similar to a startup in that they defined terms, created systems from scratch and figured out how to be relevant and to survive.  Another of Karl’s exceptional contributions to CalNet is that he suggested picking the directory UID as our generic, unchanging campus ID number. That number never changes and you can find your UID by searching for yourself at directory.berkeley.edu -- it’s listed at the bottom of your directory listing.

CalNet is currently in the process of moving from MIT Kerberos to Microsoft Active Directory as the credential store, which is one of Karl’s last major projects to complete before retirement. When Karl retires, so will Kerb. Microsoft modeled their AD Kerberos product after the MIT Kerberos design, and AD has been stable for approaching two decades; this makes Karl confident in the change. 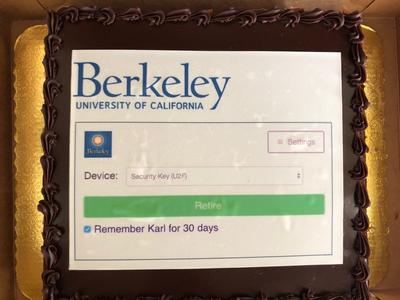 When asked what he thinks the future of CalNet looks like, Karl says we might move more of our stack into the cloud. The new CalNet Sponsored Guests service using Cirrus Identity is an example of that. Maybe our IDM data (Identity Management - and what CalNet does), will be stored elsewhere and will integrate apps differently. Possibly someday Berkeley will be more virtual than real.

After retiring from Cal, Karl plans to visit, catch up with, and provide IT support to his siblings. He will take train rides and go on road trips. His lovely wife of almost 48 years is retiring the SAME DAY, so they’ll spend more time together, too. He plans to exercise daily since it’s essential for keeping the brain going and complete projects at home and in the garden, depending on what is on his wife’s honey-do list. They will work together, planning trips, and gardening. We think he’ll continue to work on IT projects and geek out on CAS and computers because he is Karl. And we will miss him.